From Zelda Dungeon Wiki
Jump to navigation Jump to search
Want an adless experience? Log in or Create an account.
Hateno Tower 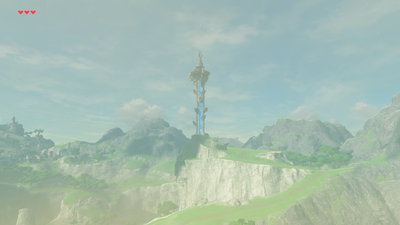 Hateno Tower is a Sheikah Tower within Breath of the Wild. It is located in East Necluda, south of the Lanayru Tower region and north of the Faron Tower region. It is also the region in which the Hateno Ancient Tech Lab is located.

The tower's travel gate faces South, opposite to the Fir River.

Like the Lake Tower, the Hateno Tower appears to have sprouted from solid ground slabs that are broken around its base, though the solid ground broken covers a smaller area than the one surrounding the Lake Tower. Located atop a short, rocky mountain, the tower is guarded by Moblins and Bokoblins, and it's covered in burnable thorns that regenerate within minutes after burning, so it's recommended to scale it as soon as the thorns are gone. Fire can be procured using a nearby torch from a cooking pot to the southwest of the tower, which is guarded by a blue Bokoblin. The tower itself has no parapets close to its base.

Breath of the Wild Sheikah Towers[edit][hide][show]
Retrieved from "https://www.zeldadungeon.net/wiki/index.php?title=Hateno_Tower&oldid=433037"
Category: