From Zelda Dungeon Wiki
Jump to navigation Jump to search
Want an adless experience? Log in or Create an account.
Ovli Plain 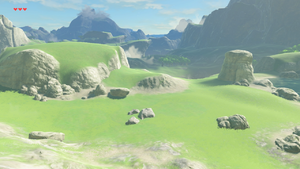 Ovli Plain is a location found in Breath of the Wild.

Ovli Plain is a large open area, found northwest of Hateno Village and just southwest of Nirvata Lake. In the center of the plain there is a massive crater that has some Ore Deposits way down below, as well as some enemy Stone Pebblits.

At the east end of the plain, directly south of Nirvata Lake, there is a Stone Talus that will rise up when Link walks by the large rocks on the floor. At the far east end of the plain, right against the wall of the steep incline that leads to the farms of Hateno Village, there is a cracked boulder in the wall. A treasure chest is concealed behind it and it contains a Purple Rupee.

Just southwest of the Nirvata Lake there is large pillar with a pinwheel on top of it. Stand near the pinwheel and shoot the five balloons to get the Korok to appear. At the west side of the plain there is a small group of trees and the tree furthest to the west has an acorn that can be shot to get a Korok Seed. Even further to the west, down by the road and north of the Fir River, there are some boulders that can be blown up. A treasure chest is hidden back here that contains an Amber gem. 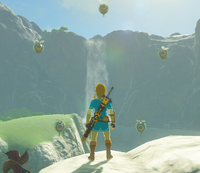 Stand near the pinwheel and shoot all five balloon targets.

Stand near the pinwheel and shoot all five balloon targets.