From Zelda Dungeon Wiki
Jump to navigation Jump to search
Want an adless experience? Log in or Create an account.
Fort Hateno 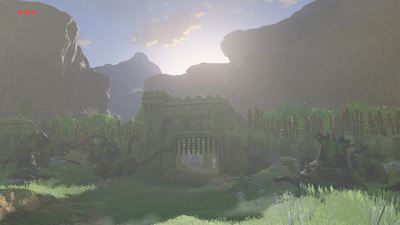 Fort Hateno is a location in Breath of the Wild.

Fort Hateno is the location of the last stand during the Great Calamity. It is here where Link and a group of fellow warriors fought off numerous Guardians before Princess Zelda awoke her true power and defeated all the remaining Guardians in the area. However, it is where Link gave his life, although his life was saved when he was transported to the Shrine of Resurrection.[1][2]

The battle and subsequent victory at Fort Hateno helped preserve most of East Necluda and is why Hateno Village was left rather untouched during the Calamity.[3]

A man named Garill patrols the fort day and night and he tells people who pass by the story of what happened at Fort Hateno. He hopes to pass down his knowledge of the battle so that future generations understand the sacrifices the soldiers had made before them.[4]

On the east side of the fort and all the way to the north, against the wall, there is a cracked boulder that can be blown up with a Bomb. Behind the wall there is a pair of treasure chests that contain an Emblazoned Shield and an Opal gem. Another treasure chest can be found sitting on top of the Zonai Tower nearby and it contains an Iron Sledgehammer. A fourth treasure chest is located way up on top of the cliff just north and east of the fort. It is located right behind a cracked wall that can be blown up with a bomb.

On top of the fort, there is a pinwheel. When Link stands near it, there are two acorns that are tossed about to the east. Link can shoot both of them with an arrow to get a Korok Seed. At the north end of the fort just to the east, there is a metal door on the floor. Link can move it out of the way with Magnesis and lift the rock to find another Korok. 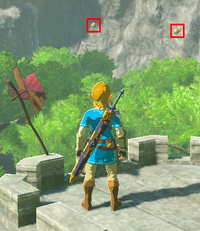 Climb on top of the stone wall and stand next to the pinwheel. Two acorns will fly above the treetops. Carefully aim and destroy them with arrows. You can use Stasis on the acorns to help you.

Climb up the gateway and stand next to the pinwheel. Shoot the flying acorns. 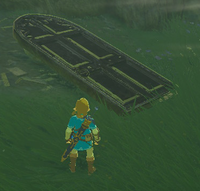 Lift the metal door with Magnesis, then the little rock with your bulging muscles.

Pick up the rock under the metal door.