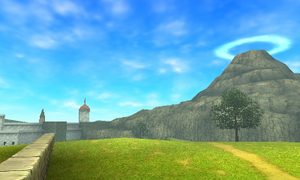 Hyrule Field is a large landmass separating two areas in The Legend of Zelda series. Hyrule Field is usually filled up with enemies and side quest items.

In each game, Hyrule Field changes. It is usually a different size, or located at a different location. Another thing that is constantly changing about Hyrule Field is the number of them in one game. But what has always stayed the same is that is a large plain that links the overworld together, and typically is the way to get to all locations in the game.

In Ocarina of Time, Hyrule Field is located in the middle of Hyrule, with Hyrule Castle Town and Hyrule Castle to the north, Kakariko Village and Death Mountain to the northeast, Zora's Domain to the east, the Kokiri Forest to the southeast, Lake Hylia to the southwest, and the Gerudo Desert to the west. Located right in the middle is Lon Lon Ranch. After Link acquires the Master Sword and goes seven years into the future, he can now find 10 Big Poes in Hyrule Field. Link can collect them all and sell them to the Poe Collector in the Ghost Shop who rewards Link with 50 Rupees for each Big Poe. Once Link has collected all 10 Poes, the Poe Collector gives Link one of the four Bottles found in Ocarina of Time.

In Twilight Princess, there are multiple Hyrule Fields within each of the three main provinces, including the Faron Province, the Eldin Province, and the Lanayru Province. 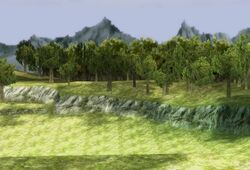 In the Faron Province, there is a large Hyrule Field that branches off to the Eldin Province and the Lanayru Provinces. It also leads to the Faron Woods to the south. Inside this large landmass, there are multiple side quest items that Link can collect. There are two Golden Bugs found in this area, including the Male and Female Beetle. There is also a single Imp Poe in the area at night. Last but not least, there is a Piece of Heart high in the trees in the center of the area.

In the Eldin Province, there is a Hyrule Field to the north of Kakariko Village, and is connected to the Bridge of Eldin. This Hyrule Field is quite large, being as wide as the Eldin Province itself. Link can find two Golden Bugs here, specifically the Male and Female Grasshopper. Also, Link can find a Piece of Heart here, high in the rocks beside the entrance to Kakariko.

In the Lanayru Province, there are multiple Hyrule Fields. They all are located near Castle Town, in three of the four compass directions, excluding the west in the Wii and east in the GameCube.

To the north of Castle Town there is a Hyrule Field, and this is where Link entered the Lanayru Province for the first time. Here, Link can find two Golden Bugs, specifically the Male and Female Stag Beetle. There are also three Imp Poes found in the area. One is only found at night, in the middle of the bridge there. The other two can be found in a cavern that Wolf Link can dig into. Finally, there is a Piece of Heart located here in the north. It is the reward for completing the Ice Block Cavern's puzzles.

Outside of Castle Town

To the east (Wii), or west (GCN) of Castle Town there is another Hyrule Field. This area contains a Twilight Portal that Link can use to warp here, making getting to Castle Town easier. As with every other Hyrule Field in Twilight Princess, there are two Golden Bugs found here, specifically the Male and the Female Butterfly. This area also holds an Imp Poe, which can be found to the southeast (Wii) of the area. Lastly, there is an Owl Statue in the area that guards a Sky Character.

To the south of Castle Town is the third Hyrule Field in the Lanayru Province. Similarly to the other Hyrule Fields, this one is stuffed with enemies, side quest items, and characters. This area plays a part in the large sequence of restoring Ilia's memory. Link comes here to find the Wooden Statue, which was stolen from Dr. Borville by Louise, and then stolen from Louise by Stalhounds. Link comes here at night and defeats all the Stalhounds, earning him the Wooden Statue. There are also tons of side quest items in the area, including two Golden Bugs, the Male and the Female Ladybug. Also, there is a single Imp Poe here that Link can kill to earn a Poe Soul. During the day, Agitha can be found walking around the area, looking for Golden Bugs. Also, there is a Goron in the south of the area attempting to break a wall of rocks. Link can help this Goron by giving him some Hot Spring Water. The Goron proceeds to knock down the wall, allowing Link easy access of Castle Town from the Faron Province. Lastly, after howling at a certain Howling Stone, the Golden Wolf appears in this area and brings Link to the Hero's Spirit, who proceeds to teach Link another Hidden Skill.

Hyrule Field is a location in Breath of the Wild.

Hyrule Field appears in Hyrule Warriors: Age of Calamity, beginning in the first scenario, The Battle of Hyrule Field.