From Zelda Dungeon Wiki
Jump to navigation Jump to search
Want an adless experience? Log in or Create an account.
Dodongo's Cavern

Dodongo's Cavern is the second Dungeon in Ocarina of Time. It is located below Goron City in the Death Mountain Trail and contains the Bomb Bag.

The cave was blocked with a huge stone by Ganondorf after the leader of the Gorons, Darunia, refused to give the King of Evil the Spiritual Stone of Fire. These events caused the Goron population to starve because their primary source of food was the gourmet rocks present in the cavern. Darunia gives Link the Goron's Bracelet so he can wipe out the monsters in the cavern and restore the Goron food source. The Bracelet gives Link the ability to lift and use Bomb Flowers to destroy the rock blocking the entrance to the cavern. After defeating the boss, King Dodongo, he is rewarded with the Goron's Ruby by Darunia. They also become sworn brothers.

Link can find the Dodongo's Cavern halfway up Death Mountain Trail. He cannot enter without first destroying the large rocks blocking the entrance. To do so, he must acquire the Goron's Bracelet from Darunia. He can do this by playing Zelda's Lullaby to open the door to Darunia's chambers in the Goron City, then playing Saria's Song to lighten the Goron chieftain's attitude. He will then grant the bracelet to Link.

To open the dungeon Link must then head outside. Leaving the Goron City, Link will find a cliff to his right overlooking the blocked entrance to the Cavern. There is a gap in the fence there with a Bomb Flower next to it. Link must lift the Bomb Flower and throw it through the gap so it lands and destroys the rock. Link can then enter the cavern.

As a Fire dungeon, the Dodongo's Cavern is mainly composed of rocky walls and lava pools. There are also a lot of Bomb Flowers. This dungeon is not as hot as Death Mountain Crater or the Fire Temple so Link is not timed without the Goron Tunic.

The dungeon consists of caves and tunnels that are centered around one large central cavern. This cavern has a large lava pool surrounding a main platform and ringed by other ledges. Beamos are situated all around this room and can be destroyed by Bomb Flowers.

Around the main platform there are also three stone cylinders that raise and lower themselves. Link can use them to move from the center to the other ledges; later he can also activate a switch that makes one of them reach to the second floor. In the north part of the room is an ancient skull said to be taken from the Dodongo Queen, and if Link drops bombs into this skull's eyes it will open its mouth to enable him to reach the final parts of the dungeon.

Throughout the dungeon are a number of fire enemies, including Fire Keese and Dodongos. If it is burned away by these enemies, there is a Business Scrub in the main room who will sell Link a replacement Deku Shield.

The item for this dungeon is the Bombs and Bomb Bag. With it, Link will receive 20 bombs to carry and use at will along with the ability to purchase Bombs and Bombchu.

The dungeon has two miniboss battles, each of them involving a pair of Lizalfos. The battles take place in a two-story room with a river of lava that flows from one floor to the next in a "lava-fall." The river is studded with rocks that Link must jump between to challenge the Lizalfos. The first battle takes place on the lower section of the room, and the second one is on the upper platforms.

To fight the Lizalfos, Link needs to focus on them one at a time by Z-Targeting. Then he simply needs to avoid their attacks and strike in between their movements to avoid being hit. The Lizalfos can be stunned for a short time using a Deku Nut. 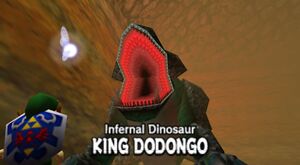 King Dodongo, the boss of the cavern, is found in the leftmost room behind the Giant Dead Dodongo Skull. When Link enters the boss room above, he will find himself in a small square room. There is a chest here containing extra Bombs as well as a square tile in the middle of the room which can be destroyed with a Bomb. This reveals a hole leading to King Dodongo's chambers.

The room Dodongo is fought in consists of a large square lava pool ringed by a narrow path barely wide enough for the Infernal Dinosaur. The cavern has a Bomb Flower situated in each corner, which Link can use to battle Dodongo with.

The fight consists of Dodongo's two primary actions. The first involves him rolling around the pathway, attempting to crush Link. He will always cover two lengths of the path, corner to corner, and the rolling attack can be blocked by shielding with the Hylian Shield equipped. After this, he will typically cease by hitting a wall, breaking out of his curling motion, and begin to slowly walk toward Link. If he gets near Link, Dodongo will begin inhaling deeply before breathing a long stream of fire that covers one length of the path.

While Dodongo is inhaling for his fire breath attack, Link can throw a Bomb into its mouth. This will cause Dodongo to swallow the bomb, and it will blow up in his stomach and make the dinosaur collapse. This is the only time Dodongo is susceptible to damage; Link can attack it with his sword only here. Typically, three repetitions will finish the battle.

Defeating Dodongo causes it to roll into the lava in the room and die, cooling the lava in the process to form a flat rock floor. Link can then collect a Heart Container and take a warp point outside, where he receives the Goron's Ruby, the Spiritual Stone of Fire, from Darunia.