From Zelda Dungeon Wiki
Jump to navigation Jump to search
Want an adless experience? Log in or Create an account.
Giant Dead Dodongo 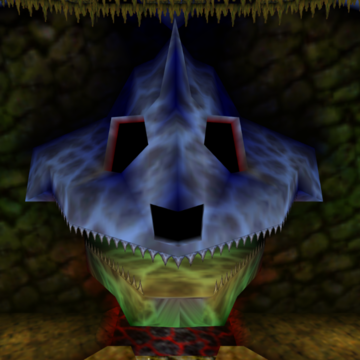 The Giant Dead Dodongo is an object from Ocarina of Time that is found within Dodongo's Cavern.

The remains of the dead Dodongo are found in the main chamber and its main purpose is to serve as a barrier, preventing Link from reaching the later portion of the dungeon. In order to progress onward, Link must drop bombs from the upper floor into the eyes of the dead Dodongo, causing them to turn red, and opening its mouth.[1] This will reveal a door that eventually leads to the later part of the dungeon where Link will fight the dungeon boss, King Dodongo.

It is unclear whether or not the statue is an actual dead Dodongo, or if it simply carved and labeled as one.