From Zelda Dungeon Wiki
Jump to navigation Jump to search
Want an adless experience? Log in or Create an account.
Fire Temple 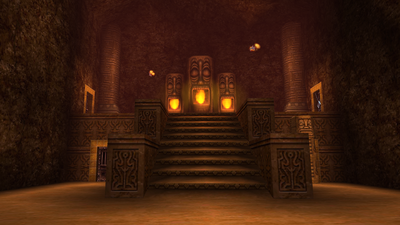 The Fire Temple is the fifth Dungeon in the game Ocarina of Time. Link discovers its existence from a Goron bearing his name - Darunia's son, Link the Goron.[1][2] It is located within the Death Mountain Crater and Link must wear the Goron Tunic to prevent death from heat. While exploring the dungeon, other than defeating the boss of the temple, Volvagia, and preventing it from destroying Hyrule, Link also has another task ahead of him. In the seven years that Link had been sealed in the Sacred Realm, Ganondorf had taken all the Gorons and locked them in jail cells inside the dungeon, awaiting to feed them to Volvagia. Each Goron has a key to a room in the dungeon inside its cage along with himself. Halfway through the temple, Link receives the Megaton Hammer, a necessity for defeating Volvagia. The hammer also has some other uses such as activating rusty switches. After Link finishes the temple and the boss, Darunia is awakened as the Sage of Fire and Link receives the Fire Medallion. The song that warps Link to this dungeon is the Bolero of Fire.

The Master Quest version of the Fire Temple is much harder than its regular counterpart, featuring many more puzzles, time challenges, and invisible walls. A wider array of items including the Hookshot and Din's Fire is necessary as well. New enemies include several Stalfos, Lizalfos (found in the boulder room) and even an Iron Knuckle. There are fewer Gorons to rescue this time around.