From Zelda Dungeon Wiki
Jump to navigation Jump to search
Want an adless experience? Log in or Create an account.
Volvagia 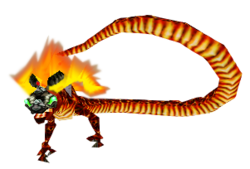 Volvagia appears as a large, red, orange-bellied snake. It has two arms with three fingers each and large, curved horns. A fiery mane protrudes from the back of its head, behind the rock-like 'mask' on its face.