Link the Goron (Ocarina of Time)

This article is about the Goron named Link in Ocarina of Time. For Link's form after using the Goron Mask, see Goron Link. 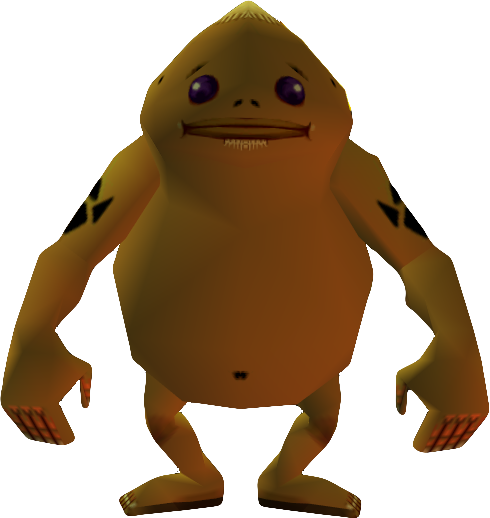 Link the Goron is a Goron that appears in Ocarina of Time. He always shares the same name as the player file name.

Goron Link is a member of the Goron race and the son of the Goron Patriarch Darunia. Goron Link is first found rolling around in Goron City on Death Mountain. When you place a Bomb or Bombchu in his path he will stop, mistaking you for one of Ganondorf's men. Very quickly it becomes apparent to him that you are the legendary Dodongo Buster from seven years earlier that he was named after.[1] He yearns to be a hero like Link, and calls himself the "Hero of the Gorons!"[2] But he is still very young and childish, and often breaks into tears because his father is gone.

After this revelation Goron Link informs you of the kidnapping of the Gorons from Goron City and the resurrection of the evil dragon Volvagia by Ganondorf. He tells you of Darunia's mission to save the Gorons from Volvagia prompting you to follow suit. Goron Link reveals the secret path to Death Mountain Crater and therefore the Fire Temple located within his father's room at the base of Goron City. He will also give you the Goron Tunic, which is used by Link to withstand the extreme heat found within both Death Mountain Crater and the Fire Temple.

After you save the Gorons, defeat Volvagia, and awaken Darunia as a Sage, Link can return to Goron City, where you will be thanked by Goron Link.