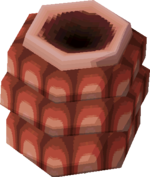 Like Likes are enemies featured in nearly every The Legend of Zelda title and first appeared in The Legend of Zelda. In certain games, they attempt to suck up Link and will eat any unique equipment he is holding at the time, including Tunics and Shields. If Link is fast enough, his equipment is returned if it is defeated.

In The Legend of Zelda, Like Likes will swallow Link, and if he is not quick enough to defeat them, they will eat his Magical Shield.

Like Likes appear only in the Game Boy Advance re-release version of A Link to the Past.

Like Likes in Link's Awakening will use all their might to swallow Link. If the Like Like is successful, it will eat Link's Shield, forcing him to purchase a new shield as a replacement. The only shield Like Likes cannot eat is the Mirror Shield.

These obnoxious piles of spam are always hungry. If Link gets too close, they will reach out towards him (making their front side invulnerable) and suck him in. If they do manage to get Link, they will steal his shield and any special tunics he is wearing. If Link does not defeat them fast enough after that, they will digest them completely. Slash them between their attacks while they are vulnerable as quick as possible.

Like Likes cannot eat the Mirror Shield or the Kokiri Tunic.

TODO: Fill in this section
Care to do so?

Like Likes in The Minish Cap act the same as they have in previous installments. Rupee Likes make their debut in this game. Instead of eating Link's shield, they will eat his Rupees.

Amongst the top three books of the week in the Royal Hyrule Library is Learn to Like Your Like Like: A Good Guide to A Bad Pet. No details about this rather odd tone are ever given.

Like Likes in The Legend of Zelda: Spirit Tracks act almost identically to those in previous installments. They will still eat Link's shield, but they are unable to eat the Shield of Antiquity. Sometimes, Like Likes will disguise themselves as pots or treasure chests, making a surprise attack on Link very likely.