From Zelda Dungeon Wiki
Jump to navigation Jump to search
Want an adless experience? Log in or Create an account.
Cheep-Cheep 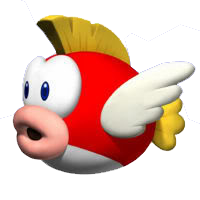 Cheep-Cheeps are very common enemies in the Mario series that have also made guest appearances in The Legend of Zelda series. Cheep-Cheeps are fish that can be found in watery area and in underground side-scrolling areas of the 2D Zelda games. They do not pose much of a threat, but some of the Cheep-Cheeps have the ability to jump out of the water and try to attack Link. Link's Sword can quickly eliminate them.

Cheep-Cheeps are weak fish that are found in the underwater sections of Angler's Tunnel and Catfish's Maw. Players may recognize these enemies from the Super Mario Bros. games. They will swim slowly left and right, or up and down on the same section of the screen. In some areas, they will also jump out of the water.[1] Any of Link's weapons will defeat a Cheep-Cheep in one hit, so it is easiest to just use his sword against them. He can also jump on them when they jump out of the water to defeat them.

Cheep-Cheeps act the same as they did in Link's Awakening. Any of Link's weapons will defeat a Cheep-Cheep in one hit. So, just use his sword against them to destroy them in one hit.

Cheep-Cheeps can be encountered when Link is swimming in side-scrolling areas. They swim slowly left and right on preset routes. They do not attempt to attack Link. So, just defeat them or swim away.

Besides the normal version of Cheep-Cheep, Link can also find Giant Cheep-Cheep in the waters. They will charge at Link and cause a lot of damage. So, defeat them or swim away quickly.

In Tingle's Balloon Fight DS, Cheep-Cheeps are giant fish that dwell in the water. They will jump out in attempt to devour Tingle or any other enemies if they gets too close to the surface of the water.