From Zelda Dungeon Wiki
Jump to navigation Jump to search
Want an adless experience? Log in or Create an account.
Crow 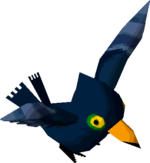 Crows are recurring enemies in The Legend of Zelda series. They attack by waiting for passing travelers and swooping down on them. They are known for stealing shiny items.

In A Link to the Past, Crows appear in the Desert of Mystery in the Light World.

In Link's Awakening, Crows appear resting on trees, particularly in Tabahl Wasteland. When Link gets close, they swoop down and fly at him, and then they exit the screen. Unless they are defeated, they will reappear on the same tree next time that Link enters the area.

Crows can be found perched on top of trees throughout Hyrule Field. When Link draws near, they will fly down and try to harm him.

Crows are identical to the Crows in A Link to the Past, although they do less damage to Link. In some places, Crows fly in from out of the screen rather than waiting in trees to attack Link.

Crows wait on large trees, and strike Link when he gets close, making him drop rupees which they proceed to steal.

In Spirit Tracks, Crows perch on the tree tops and are usually found within the Forest Realm. They will sit on trees until Link comes close to them, at which point they will take off and fly towards Link. If they miss Link then they will fly off the screen. If they are successful in attacking him they will steal a small amount of rupees from Link. A simple sword strike works best, but it must be quick as the crow will fly off if the attack misses. Crows often leave rupees as rewards for defeating them.

In A Link Between Worlds, Crows attack in similar styles to those in other games, awaiting Link to draw near before flying into the air and swooping down on him. They now rest on other items such as fence posts instead of solely on trees. When they hit Link, they no longer force him to lose rupees and so cannot steal any rupees from Link. The will not fly off screen either, instead attacking Link relentlessly until defeated or Link flees to a different screen.