From Zelda Dungeon Wiki
Jump to navigation Jump to search
Want an adless experience? Log in or Create an account.
Peahat 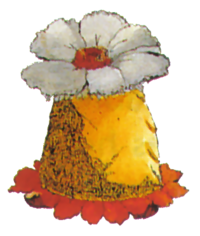 Peahats are recurring enemies in The Legend of Zelda series. They resemble a flower-like creature that can fly using its leaves.

Peahats can be found throughout the overworld in The Legend of Zelda. These enemies spin around and move rapidly around the screen. While spinning, Peahats cannot be harmed and should be avoided if possible. After spinning for a short while, a Peahat comes to a stop, at which point it is vulnerable to sword attacks from Link.[1][2][3]

If a clock is collected while peahats are flying, they remain in their invulnerable state despite being frozen.

In Link's Awakening, Peahats appear in dungeons such as Angler's Tunnel and Turtle Rock. They begin by laying still on the ground, but when Link approaches them they begin to spin and lift into the air. Just like in The Legend of Zelda, the Peahats will eventually come to a stop, allowing Link to attack them.

Peahats in Ocarina of Time are stationary around Hyrule Field. When Link approaches one, it wakes up, and flies toward him, showing its roots. These roots are their weak points. Link can either slash it with the Kokiri Sword or simply shoot it with the Slingshot. If Link wanders Hyrule Field at night, the Peahats do not wake up; however, if he slashes at one, it shoots out Peahat Larva, which can be destroyed just by holding out Link's shield.

Peahats only appear while Link is in his child form; they do not exist anywhere in the future. Furthermore, no cause or reason is given for their disappearance; they simply do not appear.

There is only one Peahat in Majora's Mask. This Peahat can be found in a hidden hole somewhere in the tall grass near the Southern Swamp and Milk Road in Termina Field. It is required to defeat this Peahat to get a Piece of Heart.

Peahats in Oracle of Ages can be found in many locations. When Link enters the screen, they are stationary, but then start spinning and flying. Link must wait until they stop moving, as they can only be damaged when they are not. It takes two strikes to defeat them with either the Wooden or Noble Sword. One strike defeats them from Master Sword.

Peahats are first encountered in the Forbidden Woods in The Wind Waker. Link must stun them with the Deku Leaf first, then damage them with his sword. Once more items like the Boomerang or Bow are obtained, Link can use those to defeat the Peahats more easily. Peahats drop Golden Feathers when defeated or attacked with the Grappling Hook.

There are two different varieties of Peahats found within The Minish Cap. The red ones are first encountered in the Eastern Hills and they share similar attributes to previous incarnations of the enemy. The green Peahats fly out of reach while carrying bombs. When they attempt to drop the bomb on Link, the Peahat lowers itself to the ground temporarily. Once the Peahat lowers itself, it can be defeated by using the Gust Jar or the Bow. If Link uses arrows, the Peahat can be defeated with one arrow. If Link uses the Gust Jar, he can disable it, making it vulnerable to sword attacks, or he can suck the Peahat in and launch it, destroying it on impact.

Peahats in Twilight Princess act differently than other incarnations of Peahat. In this game, Peahats do not harm Link, but instead are used as Clawshot targets. Peahats only appear in the Gerudo Desert and the seventh dungeon of the game, the City in the Sky.

In Skyward Sword, Peahats are not as much of an enemy, but instead are very similar to their Twilight Princess counterparts. They act as Clawshot targets, and are found within the Lanayru Desert region, in the Eldin Volcano region after it has erupted and is at normalcy, and when in Faron Woods when the woods are flooded. Because of the fact that they are moving Clawshot targets, it can be quite challenging to grab hold of them. The most difficult Peahats to latch on to are found in Skipper's Retreat, where, along with the constant moving, there are Furnixes there to make it even harder.