From Zelda Dungeon Wiki
Jump to navigation Jump to search
Want an adless experience? Log in or Create an account.
Castor Wilds 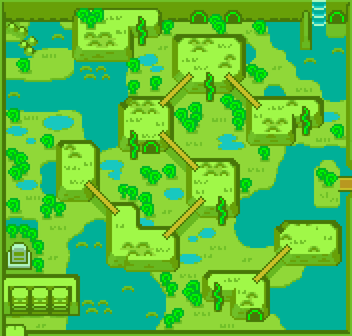 In-game map of the Castor Wilds

Castor Wilds is a swamp-like area in The Minish Cap.

Link must use the Pegasus Boots, which he gets from Rem the shoemaker, to cross swamps here. In this area, Link must collect three gold kinstones to open the way to the temple. The item that Link obtains in this area is the Bow, which can be used to defeat the small Eyegore statues scattered around. When Link is in a Minish-sized area, this area is full of Mulldozers; otherwise, it is full of Ropes and Peahats.

To travel to the Wind Ruins, Link must locate the three Gold Kinstone Pieces hidden in the area, and fuse them with the Mysterious Statues in the south-west corner.

This area is also home to Scarblade, who teaches Link a faster Spin Attack, and Swiftblade the First, the ghostly sword master who teaches Link the final technique in the game. However, the latter's den is hidden until Link fuses kinstones elsewhere. Other rewards in this area include additional Minish homes and floating leaves for Minish Link to ride on.