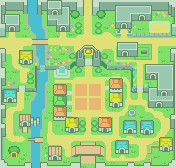 Hyrule Town is a location in The Minish Cap. It is much like Castle Town from other The Legend of Zelda games. It is a large, bustling town south of Hyrule Castle, and it is filled with shops, houses and useful characters. Four areas lead to Hyrule Town: North Hyrule Field to the north, South Hyrule Field to the south, Trilby Highlands to the west, and Lon Lon Ranch to the east. Once a year, the Picori Festival is held here, which Link and Zelda attend at the beginning of the game.

There are several characters who will always fuse Kinstones with Link in Hyrule Town. They are as follows: