From Zelda Dungeon Wiki
Jump to navigation Jump to search
Want an adless experience? Log in or Create an account.
Real Bombchu 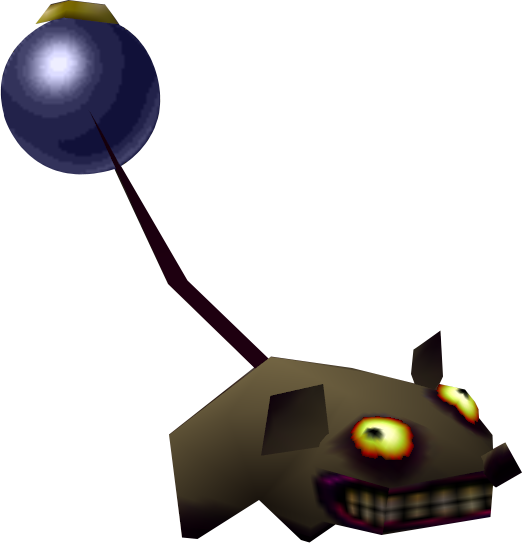 Real Bombchus are the living mouse-like counterpart of the Bombchu which runs around and explodes upon contact with Link. They are the in-game inspiration for Bombchus. Real Bombchus were first introduced in Majora's Mask, and later appeared in The Wind Waker and Four Swords Adventures.

Bombchus make their first appearance in Majora's Mask. They are first found within the Snowhead Temple, and later in the Great Bay Temple and the Stone Tower Temple. The easiest and most effective way to deal with this foe is to run into them while using the Shield. This causes them to fall back and explode. Another effective method is to shoot a simple Arrow at them from afar, which causes them to instantly explode. Using Link's Kokiri Sword is not recommended because doing so causes the Bombchu to explode right next to Link, likely costing him some hearts. The Hookshot is also not advised because it brings the Real Bombchu over directly in front of Link.

In The Wind Waker, Real Bombchus are a variation of Rats that carry around Bombs. They pick up their Bomb and throw it at Link, then go back to their hole to re-stock. While not much of a threat, they can be a bit annoying. They can only be defeated while outside their hole, so the best plan of action is to wait for them to come out, then slash away with the Sword.