From Zelda Dungeon Wiki
Jump to navigation Jump to search
Want an adless experience? Log in or Create an account.
Mad Scrub 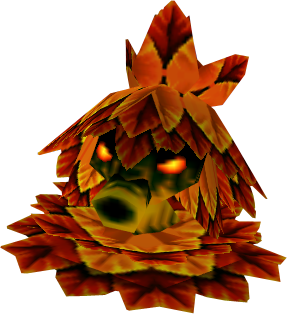 The Mad Scrub is an enemy that appears in Ocarina of Time and Majora's Mask. It is a relative of the Deku Scrub and seems to be a frenzied version of the regular business happy Deku Scrub. It is an almost exact look-alike from the regular Deku Scrub. The only difference is its autumn leaf. Its skin is also slightly greener; both of these differences signify its madness. The Mad Scrubs generally live in swamps and forests as they are only found in those environments.

The behavior of the Mad Scrub is well known for the fact that it won't back down to sell Link items or tell him hints, but instead runs away from Link until it gets back to its plant. It also shoots three Deku Nuts instead of one. Like its relatives, it hides from Link if he gets too close.

The Mad Scrubs in Majora's Mask are found within Woodfall. They appear on the wooden tree stumps and spit rocks at Link whenever he is near. After they are defeated, their flower turns into a Deku Flower.