From Zelda Dungeon Wiki
Jump to navigation Jump to search
Want an adless experience? Log in or Create an account.
Beamos 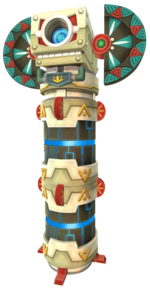 Beamos are recurring enemies in The Legend of Zelda series. They are mechanical statues that serve as a security system in dungeons, rotating and monitoring a certain portion of territory. They shoot beams at Link if they spot him.

The Beamos makes its debut appearance in A Link to the Past. In this game, they are indestructible, stationary totem pole-like enemies that constantly spin around, gazing around the room. If its eye sees Link, it will fire a beam, dealing one heart of damage. The only two ways to defend against this impenetrable enemy is to either use the Mirror Shield or hide behind a structure like a wall or jar.

In Link's Awakening, the Beamos look different, but act the same as those from A Link to the Past.

Beamos are not extremely common in Ocarina of Time, but a few places they can be found are the Bottom of the Well, Shadow Temple, Dodongo's Cavern, Gerudo Training Ground, Spirit Temple, and Ganon's Castle. They do not pose much of a threat, as their only attack is to shoot a laser from its eye towards Link. To defeat them, blow them up with either a Bomb, a Bomb Flower, or a Bombchu. Their first appearance is in the second dungeon of the game, Dodongo's Cavern.

In Majora's Mask, Beamos are found only in the Stone Tower area, including Stone Tower Temple itself. They haven't changed from Ocarina of Time, and, just like the previous game, they fire a beam at Link if he gets spotted by its eye while in the Beamos' territory. The only way to defeat them is to throw a Bomb, use a Bombchu, or use the Blast Mask near them.

Beamos in Oracle of Seasons and Oracle of Ages act very similar to the Beamos in Link's Awakening.

The Beamos has multiple different looks in The Wind Waker.

Blue Beamos are statue-like creatures that remain stationary. The eye at the top of their main 'body' will stay in one spot. Link can defeat them with the Skull Hammer, a Bomb, or an arrow, but they are only vulnerable when they are attacking Link as well.

Red Beamos are statue-like creatures that remain stationary. The eye at the top of their main 'body' rotates around, unlike the Blue Beamos, which remains stationary. If it sees Link, it will try and attack him with its laser. Link can defeat them with the Skull Hammer, a bomb, or an arrow, but they are only vulnerable when they are attacking Link as well.

Beamos in Four Swords Adventures are almost identical to the Beamos in A Link to the Past.

Beamos in Twilight Princess are very different from Beamos from past 3D Zelda games. They can only be defeated by striking its eye with Link's Hero's Bow. They come in two varieties; Brown and White.

Mostly found in the Goron Mines and other smaller caves, including the Lake Hylia Cavern and Bridge of Eldin Cavern, this Beamos shoots fire beams at Link. They can be defeated by shooting an arrow into their eye with the Hero's Bow. After being defeated, Link can drag them on a set path to cover switches or get to treasure chests.

Located exclusively in the Temple of Time, the White Beamos shoot beams at Link. They can be defeated by shooting an arrow at its eye, or by being smashed by the Ancient Statue Link controls with the Dominion Rod.

Beamos in Phantom Hourglass are indestructible, continuously rotating beam turrets that only shoot at Link when he is in its line of sight. The beam itself comes out of the green, yellow, and white thing on the front. Link can shoot an arrow at the source of the beam, stunning it temporarily. They are found in the Goron Temple.

Beamos are multi-layered, totem pole-like objects found within the Lanayru Mining Facility and Sandship made up of two to three different electrified parts. The head of the Beamos turns in a mechanical way, as opposed to a fluent turning motion. These enemies can be defeated by horizontally slicing apart different sections of their body, and then stabbing the eye. Alternatively, Link can simply shoot an arrow into its eye with his Bow. The Beamos will shoot out a laser beam from its eye dealing electrical damage and temporarily paralyzing Link, but this attack can be deflected using a non-metal shield, like the Wooden, Sacred, or Hylian Shield.

Beamos can be found in many stages in Hyrule Warriors. They act as they do in other games they have appeared in, shooting a laser at Link when he is spotted. They can be destroyed by throwing bombs at them.