This article is about the floating skull enemies. For the literal bubble enemies found Inside Jabu-Jabu's Belly, see Shabom. 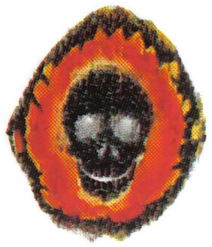 Bubbles are recurring enemies in The Legend of Zelda series. They typically consist of a floating head with flames around it. In some games, bubbles have wings, too. There are many different varieties, each with their own distinct color. They attack by ramming into Link, which causes an effect that varies between games. In some games, Bubbles are invincible.

Bubbles appear within many dungeons of The Legend of Zelda. When Link touches one of these enemies, he will not be able to swing his sword for several seconds. In the Second Quest, there are Red and Blue Bubbles. If Link ever touches a Red Bubble, he won't be able to use his sword at all. In order to regain control over his sword, he must touch a Blue Bubble, visit a Fairy Fountain, drink a potion, or pick up a Triforce fragment.

Bubbles ricochet off the walls at 45 degree angles. Depending on Link's attack level, they can take as many as a staggering 126 hits at level 1 down to eleven hits at level 8. A more powerful variant of the Bubble is found in the Great Palace that hits much harder, but yields less than half of the normal experience.

Bubbles not only cause damage to Link, but they also steal some of his magic power like Anti-Fairys in A Link to the Past.

Bubbles from Ocarina of Time come in four colors:

Blue Bubbles are commonly found within the Forest Temple. They float around randomly and only pursue Link upon close proximity. A simple arrow to the skull is enough to knock them to the ground. A follow up with the sword is enough to defeat them.

Red Bubbles, commonly referred to as Fire Bubbles, only appear in lava fields and shoot up and out while bouncing around before entering the lava pool again. The only effective way in combating this form of Bubble is a deflection from a shield followed by an arrow or sword strike.

Green Bubbles are the more tame form of the Bubble. They have fixed motion paths and do not pursue Link or move fast. The Green Bubble can only be attacked while the Green flame is missing, which occurs every few seconds.

Only found within the Spirit Temple, this Bubble species flies at a fast rate of speed in the air before stopping and extinguishes its flame before redirecting itself. Just like the Green Bubble, this Bubble is only vulnerable when its flame disappears.

In Majora's Mask, only Blue and Red Bubbles. Blue Bubbles can now jinx Link, disabling Link's sword icon for some time, akin to Bubbles from The Legend of Zelda. The jinx can be negated by drinking a Blue Potion or playing the Song of Storms.

The jinx does not affect inventory items, including the Great Fairy's Sword, nor the moves Link has on his sword button while transformed, such as Goron Link's Punch.

Bubbles are floating skulls with red "bubbles" floating around the outside of it. They bounce on walls and try to bump into Link, which causes him damage and disable the use of his weapons for a limited amount of time. There is no way to defeat this enemy and it can be very annoying when there are several enemies to battle at once. Simply try to avoid this enemy whenever it appears.

Bubbles are seen periodically throughout the game. Unlike most enemies, they can exist in the Dark World. If they touch Link, they will deal a small amount of damage. They cannot be destroyed by Link's sword. Jumping over them with the Roc's Feather is efficient in avoiding them.


Bubbles appear as an odd mix of a Keese and a skull. Despite their creepy looks, Bubbles are some of the easier enemies in the game. Link can shoot them down from afar with arrows, or simply strike them once with his sword, causing them to retract their wings and fall helplessly to the ground. Do NOT perform the Ending Blow when a Bubble is in this state. It is pretty hard to hit, and will leave Link with his sword planted in the ground, rather it is easier to just strike it with your sword normally while it is in this helpless state. After a few moments, the wingless Bubble will grow wings again and resume flying. Twilight Princess also contains Fire and Ice Bubbles.

Fire and Ice Bubbles make an appearance in Phantom Hourglass. They first appear in the Temple of Fire, and reappear in many of the later temples. To defeat one, first whack it with the Boomerang, it will cause it to jump around helplessly. Then, use Link's sword to finish it off. Attacking before the flames are dispelled will cause Link to be burned or frozen.

A Bubble appears for a short period of time when Link is battling with a Mothula. The mothula releases the Bubble and it flies towards Link. Link then uses the whirlwind to launch the Bubble back at mothula.

The Bubble takes a similar form as it did in Phantom Hourglass. However it is surrounded by a purple cloud around it, which differs from Phantom Hourglass Bubbles that were surrounded by either red or light blue clouds, signifying whether the Bubble was fire or ice based. Perhaps the purple signifies that it is a neutral Bubble or that this is just the mothula released Bubbles.