From Zelda Dungeon Wiki
Jump to navigation Jump to search
Want an adless experience? Log in or Create an account.
Imp Poe 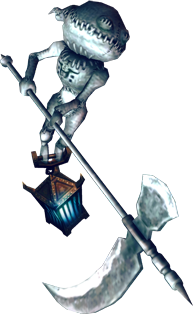 Imp Poes are a specific kind of Poe found exclusively in Twilight Princess. Unlike Poes in other games, Imp Poes can only be fought when Link is in his wolf form and using his senses. To defeat an Imp Poe, strike it twice with a regular attack or once with Midna's Charge Attack. Once the Imp Poe is down, finish it off with a Fatal Blow and steal its soul.

The first Imp Poe that Link encounters in Twilight Princess, is on his quest to revive the gravely injured Midna. While looking for an entrance to the Castle Town Sewers, Wolf Link comes across a secret passage in Jovani's House within Castle Town. Inside Link defeats the Poe and is asked by Jovani to break the curse set on him by hunting the remaining Poes across Hyrule. However, they only appear during the nighttime in the main overworld.

In the Arbiter's Grounds, Link meets four different Poes, called Big Poes. These are stronger than normal ones and all have to be defeated in order to progress. When Link has collected 20 Poe Souls, he can give them to Jovani in exchange for a Bottle filled with Great Fairy's Tears. If Link manages to collect all 60 Poe Souls and deliver them to Jovani, he can get 200 Rupees from Jovani's cat, Gengle, each time he speaks to it. Now the curse set on Jovani lifts meaning he returns to his original state.