From Zelda Dungeon Wiki
Jump to navigation Jump to search
Want an adless experience? Log in or Create an account.
Shadow Keese 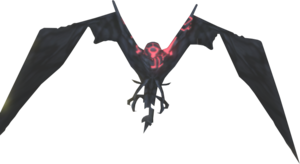 Shadow Keese are a variation of the standard Keese found exclusively in Twilight Princess. Other than stylistic differences they are exactly the same as normal Keese. They behave the same and require the same amount of damage to defeat. As Wolf Link, the best way to kill them in to use either a Spin Attack or a simple Jump Attack. As Hylian Link, sword slashes, Clawshot, or the Bow are the best ways to take these guys down. When in groups, Spin Attacks are the most effective attacks.

Shadow Keese can be found in the Palace of Twilight, as well as the Twilight-covered Castle Town Sewers, Faron Woods, Graveyard, Kakariko Village, Death Mountain, Hyrule Field and Zora's Domain.