From Zelda Dungeon Wiki
Jump to navigation Jump to search
Want an adless experience? Log in or Create an account.
Clawshot 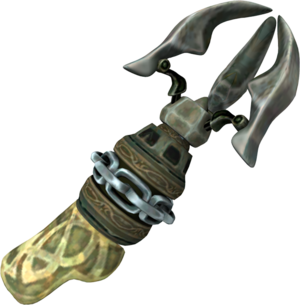 The Clawshot is an item in Twilight Princess and Skyward Sword. It is a long chain with a claw on the end.[3] It can be used to do multiple things, including grapple to certain targets, retrieve objects, stun enemies, and more.[2] In both games, the Clawshot has a pair that combines to make the Double Clawshots.

The Clawshot makes its first appearance in Twilight Princess. It is found in the third dungeon of the game, the Lakebed Temple. In order to collect it, Link must defeat the Mini-Boss of the dungeon, the Deku Toad.[1]

The Clawshot is mainly used in Twilight Princess to grapple on to targets, steel grates, and vines. Most areas in the game have one or more of these targets. It is also used to stun enemies and retrieve objects that are far away. Since it is a chain that is propelled, the Clawshot cannot be stopped by wind. This characteristic is used in the City in the Sky, where Link has to activate a switch using the Clawshot, because the Hero's Bow cannot shoot through the wind that blows away from the switch. The Clawshot is one of the most used items in the entire game.

The Clawshot is also used in the STAR Game. In this game, Link can use the Clawshot to travel around the caged areas in order to collect shiny orbs. If Link successfully collects all the orbs within the time limit, he wins a quiver upgrade.

Clawshots in use in Skyward Sword

The Clawshot makes its second appearance in Skyward Sword. Here, the Double Clawshots are obtained together after completing the Lanayru Desert Silent Realm.

The Double Clawshots are mainly used to explore the Lanayru Sand Sea and its related locations, and are also essential for exploring the Fire Sanctuary, post-eruption Eldin Volcano, Lanayru Gorge and Sky Keep. The earlier availability of the Clawshots in the game provide them more time and room for use in comparison to Twilight Princess, though some properties of their functionality have been removed.