From Zelda Dungeon Wiki
Jump to navigation Jump to search
Want an adless experience? Log in or Create an account.
Sinking Lure 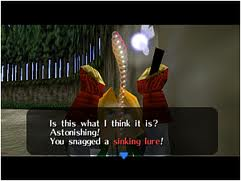 The Sinking Lure is a Fishing Lure that appears in both Ocarina of Time and Twilight Princess. It is one of the few ways to catch the rare Hylian Loach.

In Ocarina of Time, the bigger fish tend to swim on the bottom of the Fishing Pond. The Sinking Lure must be used to sink lower in the water. It can be found in four different locations around the pond. The Sinking Lure makes Fish much easier to catch, and lets Link catch much bigger fish. Until the owner lets Link use the lure, the fish he catches don't count. If Link talks to the owner and says, "I want to talk about something", he lets Link use the lure. It is useful for catching the biggest fish in the pond and is required to catch the Hylian Loach.

The Sinking Lure in Twilight Princess can be found by using the Fishing Rod in a specific section of the Fishing Hole. If Hena sees the Sinking Lure, she will take it away from Link. As long as he goes alone, she won't see it. Just like in Ocarina of Time, Link can catch fish much easier with this lure. The Sinking Lure and the Frog Lure are the only two lures that can catch the legendary Hylian Loach.