From Zelda Dungeon Wiki
Jump to navigation Jump to search
Want an adless experience? Log in or Create an account.
Deku Toad 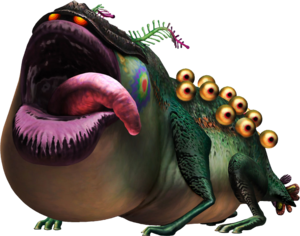 The Deku Toad is the Mini-Boss of the third Dungeon in Twilight Princess, the Lakebed Temple.

The Deku Toad appears as a giant toad, with slimy scales and four legs that hold it up. Its face consists of two tiny eyes, large lips, and an enormously long tongue. That tongue is the toad's weakpoint, and Link must exploit it to defeat the Deku Toad. During the battle, tiny eggs will appear on its back, fall to the ground and become Toads.

The large Deku Toad will begin the battle by hatching a bunch of little toads from its back. The little toads are your main concern, so start slashing at them one by one. There are way too many to Z-target them individually, so just use spin attacks to attack several of them at once. Keep sword slashing until all of them have been defeated.

Once all the little toads have been defeated, the Deku Toad will jump in the air and try to land on top of you. You will be able to see its shadow as it falls from the ceiling. It is best to roll to the side of the toad, rather than towards its head. The giant toad will miss and stun itself when it hits the floor. Quickly run to its mouth and target its tongue. Slash at it as many times as you can until the Deku Toad gets back up.

Once the Deku Toad gets up, it will soon open its large mouth. Quickly equip the bomb arrows and Z-target the toad. Send one flying and the toad will fall to the floor, stunned once again. Run over to its tongue and slash once again with your sword.

Once the toad awakes, it will shake and more toads will fall to the ground. Defeat them just as before and the toad will jump in the air. Once again roll out of the way and once the toad is stunned, slash at its tongue. Repeat this process until the Deku Toad has been defeated.

Once Link has defeated the Deku Toad, it will cough up a chest and disintegrate. Link can then open the chest and obtain the Clawshot, which proves pivotal in advancing through the remainder of the dungeon.