This article is about the item as it appears in Twilight Princess. For Twili Midna's weapon in Hyrule Warriors, see Mirror (Hyrule Warriors). 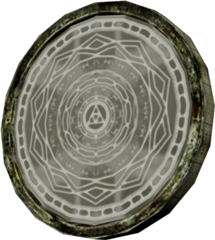 The Mirror of Twilight is a titular aspect of the story of Twilight Princess, as it is a crossroads between Hyrule and the Twilight Realm.

In the distant past of Hyrule, during the time when humans inhabited the Sacred Realm, a group of humans who had a mastery of Dark Magic created the Fused Shadow and attempted to control the Sacred Realm. The three Light Spirits of Hyrule, Faron, Eldin, and Lanayru, took the Fused Shadow from them and broke it apart, hiding each fragment in one of the three dungeons, the Forest Temple, Goron Mines, and the Lakebed Temple. The fourth fragment was reclaimed by the Dark Magic masters, also called the Dark Interlopers, who were chased across Hyrule by the goddesses themselves before being cast through the Mirror of Twilight. For an unknown reason, the Mirror was not destroyed, but was left deep in the Arbiter's Grounds.

In Twilight Princess, the area containing the Mirror of Twilight is found deep in the Arbiter's Grounds. The Sages of Hyrule used the area to attempt to execute Ganondorf before he escaped and killed the Sage of Water, forcing them to banish him through the Mirror. It is then implied that Zant and the Twili army use the Mirror to enter Hyrule and the Light World. When Link arrives at the Mirror Chamber, the Sages reveal that Zant shattered the Mirror of Twilight to prevent access to the Twilight Realm. The three following dungeons: Snowpeak Ruins, Temple of Time, and City in the Sky, have bosses who contain the three missing Mirror Shards. The Mirror of Twilight then has the power necessary to send Link and Midna to the Twilight Realm. In the final cutscene of the game, Midna, revealed as Twilight Princess, completely destroys the Mirror, preventing further commerce between the Realms.