From Zelda Dungeon Wiki
Jump to navigation Jump to search
Want an adless experience? Log in or Create an account.
Forest Temple 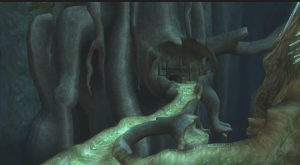 The Forest Temple is the first dungeon in Twilight Princess. It is located at the far northeast of Faron Woods, where a spiderweb blocks the entrance. The dungeon itself seems to be within the grounds of large withered tree, reminiscent of the first dungeon of Ocarina of Time. The main theme of this dungeon, like the name suggests, is the forest. Furthermore, the dungeon holds many of the same enemies found in and around the Faron Woods, a forest in itself.

After Link has collected all of the Tears of Light and placed them into the Vessel of Light, the Light Spirit Faron reveals to Link the answer to why he was turned into a blue-eyed beast in the Twilight while everyone else become mere spirits.[3] Faron reveals that Link is the chosen hero of the gods.[4] Faron tells Link that he and the other light spirits hid away a forbidden power deep within the Faron Woods.[5][6] However, he pleads Link to acquire this forbidden power, as it is the only way to match the power of Zant, the alleged King of Shadows.[7] He finishes his speech by telling Link that if he would seek this power, to head to the temple in the forest depths, the temple known as the Forest Temple.[8]

Once Link enters the Forest Temple, it is quickly apparent that the temple is home to numerous Monkeys, including the leader, Ook, who has been possessed.[9] After rescuing four of the monkeys from the first half of the dungeon, Link can swing, literally, to the location of Ook and fight him. Once defeated, Ook doesn't die, but instead a bug-like being that had possessed Ook dies. Ook, who is now a lot more cowardly and a lot less evil, runs away and leaves behind the Gale Boomerang. The Gale Boomerang immediately reacts to its release, by flying in the air towards Link, where the Fairy of Winds who resides in the boomerang[10] asks Link to take the boomerang and use it to aid his quest.[11] Using the Gale Boomerang, Link can rescue the rest of the monkeys that have been captured and use them to gain entrance to the Boss Chamber, where Diababa awaits. Defeating Diababa rewards Link with the first piece of the Fused Shadow.

Being the first dungeon of the game, the enemies found throughout the Forest Temple are some of the most basic enemies in the entire game. Most are easily defeated with a single swing of Link's Sword. The enemies found are listed below. 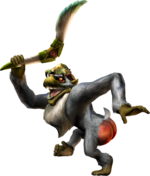 The Mini-Boss of the Forest Temple is Ook, the leader of the monkeys.[12][13] Gaining access to the Mini-Boss room requires Link to free four monkeys from their cages and use them to swing over the large gap between the main dungeon and the chamber where Ook lies. There was previously a bridge spanning across the gap, but Ook cut it off with the Gale Boomerang. During the battle, Ook uses the Gale Boomerang to release Baba Serpents that are hanging from the ceiling. They can be quickly defeated by slaying them both with a Spin Attack; otherwise, they act as more of an obstacle, and thus should be avoided. After Link has defeated Ook, Ook appears to be very confused as to his surroundings, and once he sees Link he exits the room and leaves behind the Gale Boomerang for Link to collect.[14] With the Gale Boomerang in hand, Link can travel even further into the dungeon as he continues his search for a part of the Fused Shadow. 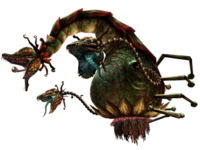 The Boss of the Forest Temple is known as the Twilit Parasite: Diababa. This parasitic version of a standard Deku Baba is a 3-headed mutation[1] caused by the powerful Fused Shadow. Diababa can be defeated using a combination of Bombling attacks and Sword attacks. Ook, at one point an enemy, actually assists Link in this battle by providing Link with Bomblings[15] after Diababa destroys the ones in the area. After Link has performed an Ending Blow on Diababa, it explodes into a million tiny black spots. These spots come together to form the first piece of the Fused Shadow. Midna tells Link that this is what she has been looking for,[16] and urges him to continue in search of the rest.[17] With that, the Forest Temple is completed.

The Forest Temple holds much of the same Dungeon Items featured in dungeons throughout The Legend of Zelda series. These items include the Dungeon Map, the Compass, the Big Key, and Small Keys.

The Dungeon Map is a very useful item, one of the more useful items in the game. It shows Link the entire make-up of the Forest Temple, thus preventing Link from ever getting lost. It can be found in the second room from the start of the dungeon. At the top of the stairs in this room, there are four unlit torches on each corner of the altar-like area. If Link lights them all up with his Lantern, stairs appear in front of him, leading to a platform that was previously unreachable. On this platform, there is a chest to the left. Inside this chest is the Dungeon Map.

The Compass is the second of the four Dungeon Items found in the Forest Temple. It shows Link the exact location of every Treasure Chest, every trapped Monkey, and the location of the Boss on his map. It is found in the second room of the dungeon, the same room the Dungeon Map is in. The Gale Boomerang is required to get the compass, as the chest that houses it is suspended in the air above Link by a spiderweb. The Gale Boomerang is the only item that Link can use to cut the web, allowing him access to the chest, which coincidently lands right in the middle of the altar-like area.

The Big Key is the one and only key that Link can use to unlock the door that leads to the area where Diababa lurks. In order to reach the location of the Boss Key, Link must head, from the entrance, through the first room and into the second room. He then must go up the stairs and go over the gap to the left side using a monkey. In the next room, Link can simply follow the path laid out for him until he reaches a gate that blocks access to the chest behind it. Link can use the Gale Boomerang to activate the windmills in a specific order specified by the pattern on the floor. Doing so correctly opens the gates, allowing Link the opportunity to open the chest and gain the Big Key.

There are four Small Keys that can be found throughout the Forest Temple. Three of them can be found in a Treasure Chest, while the last one can be collected after defeating a Big Baba, who had previously swallowed it. The keys are used to either open an individual monkey's jail cell, or to unlock a door to advance further in the dungeon. Either way, they are also required to complete the dungeon.

Throughout the Forest Temple, there are 14 total Treasure Chests that can be found throughout the dungeon. They contain many different items that include Rupees, Dungeon Items, and Pieces of Heart.

Out of the 14 Treasure Chests in the Forest Temple, six of them contain Rupees. Link can find three chests that contain a Yellow Rupee, which is worth ten Rupees.[18] The other three that can be found all contain a single Red Rupee, which is worth 20 Rupees.[19] Therefore, Link can collect a total of 90 Rupees in this dungeon from the Treasure Chests. He can certainly acquire more from grass, pots, enemies, etc.

There are four different Dungeon Items found in the Forest Temple. These include the Dungeon Map, the Compass, the Big Key, and four Small Keys. Six of these items can be found in Treasure Chests throughout the dungeon. The only one that is not found in a Treasure Chest is one of the Small Keys, which is found on the floor after defeating a specific Big Baba.

Two Pieces of Heart can be found in the Forest Temple. These are the second and third Pieces of Heart that can be found in the game. The first is found in the staircase cavern. Link can drop a Bombling on top of the lower-level Deku Like to reveal a small cave that houses a treasure chest containing the piece. The second is in a room with several Tile Worms. After getting the Gale Boomerang, Link can re-enter this room and target the two lit torches. Once they are both out, and the entire large staircase recedes, allowing Link entrance to a cave which houses the Piece of Heart-carrying chest within.