From Zelda Dungeon Wiki
Jump to navigation Jump to search
Want an adless experience? Log in or Create an account.
Mirror Chamber 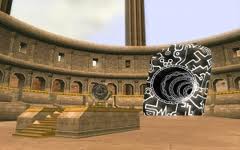 At this point, the Ancient Sages appear before them and speak of what had happened. The Sages explain how they were tasked with guarding the Mirror and how it was shattered before they came here. One of the Sages then goes on to speak of how they were sentenced to kill Ganondorf, an evil demon who attempted to access the Sacred Realm. However, after impaling him with the Sword of the Six Sages, by some "divine prank", Ganondorf was able to acquire the Triforce of Power and break free of his imprisonment. With no choice left, the Sages sealed him within the Twilight Realm. The Sages then inform the two of them where these fragments are located, one in the snowy mountain heights, one in a ancient grove, and a final one in the heavens.