From Zelda Dungeon Wiki
Jump to navigation Jump to search
Want an adless experience? Log in or Create an account.
Faron Spring 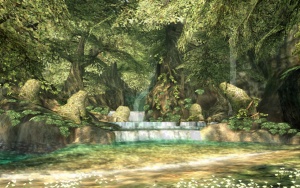 The Faron Spring is a location that appears in Twilight Princess. It is situated within the Faron Province towards the southern section. It is the home to the second Light Spirit, Faron.

Link meets Faron early on in the game during his first visit in Wolf form. The province of Faron has been shrouded in Twilight due to the Shadow Beasts stealing the light from the region. This is where Link first meets the second Light Spirit of the game. He is told by Faron to restore the light to the Province by collecting sixteen Tears of Light.[1] Each tear is housed within a Shadow Insect and Faron marks the location of each tear on Link's map.[2] Once completed, Link returns to speak to the spirit. It is here where Link first learns from Faron that he is the Chosen Hero.[3] He is also told some brief information on Zant and that he must kill the King of the Twili. In this cut-scene Link wakes to find himself dressed in the Hero's Clothes.[4]

There are actually no requirements to return to the Spring once Link restores the light to Faron Province. However, after reaching the 20th floor of the Cave of Ordeals, the Great Fairy releases Fairies into the Spring.[5] Link can return to the spring at any time and use the fairies to recover his hearts, or he can keep them in his Bottle for later use.