From Zelda Dungeon Wiki
Jump to navigation Jump to search
Want an adless experience? Log in or Create an account.
King Zora's Grave 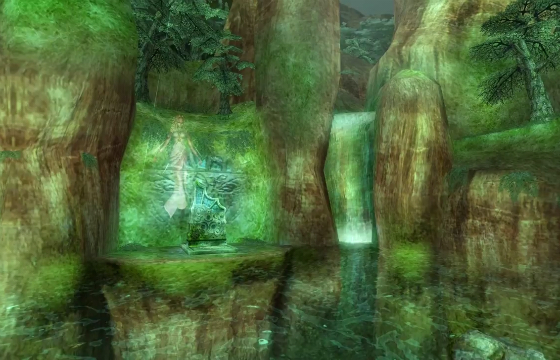 King Zora's Grave is a location that appears in Twilight Princess. It is located behind the Graveyard in Kakariko Village. It is the resting place of King Zora, the former ruler of the Zora. In contrast to the run down Graveyard, the location surrounding King Zora's Grave seems to be very peaceful.

Link first encounters this area after transporting the sick Prince Ralis to Kakariko Village, where he rests within the safe confines of the Elde Inn. After talking with Telma outside the Inn, Queen Rutela appears. The past queen was recently executed in front of her people by the Usurper King Zant.[1][2] The spirit of Rutela thanks Link for aiding her son, Prince Ralis.[3] She then guides Link through the village and into the Graveyard. The stone that was situated to the far end of the Graveyard now clears, revealing a small crawl space that leads to King Zora's Grave. Link can then crawl through the hole and find the resting place of King Zora.[4][5] Link comes across a small pool of water, which he must swim to the far end, where the tombstone lies. There, Queen Rutela moves the grave, which reveals the Zora Armor. King Zora crafted this armor specifically for the chosen hero.[6]

Later on in his quest, Link must return to this location. When investigating the mysterious area of Snowpeak, Link seeks out the help of Ashei, who hands him a sketch. Link then heads to King Zora's Grave, where he finds Prince Ralis mourning the death of his parents. Link proceeds to show the young prince Ashei's Sketch. Prince Ralis soon recognises the monster in the sketch and notices the fish it is holding is, in fact, a Reekfish. Ralis then hands Link a Coral Earring, which can be used to catch the Reekfish in Zora's Domain.