From Zelda Dungeon Wiki
Jump to navigation Jump to search
Want an adless experience? Log in or Create an account.
Elde Inn 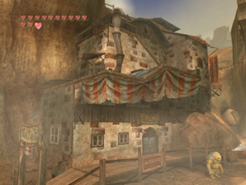 Elde Inn in the GameCube version
In Other Languages[show][hide]

The Elde Inn[1] is a location from Twilight Princess. It is the local hotel of Kakariko Village. It has two floors: the bottom floor that consists of a small kitchen to the left of the main entrance and the main lobby, and the top floor that consists of one room with a wardrobe and multiple beds spread across the room. According to a sign outside the inn, rooms cost 100 Rupees a night and include a continental breakfast and free access to the Kakariko Hot Spring.[1]

While the Eldin Province is covered in Twilight, Wolf Link sets out in search of the Tears of Light that were stolen by the Shadow Insects, as directed by the Light Spirit Eldin.[2] While Link is searching through Kakariko Village, he can find a strange sign right in front of a ramp that says "Dead End Ahead - Elde Inn Management".[3] If Link runs up the ramp, he can find another sign directly in front of a large drop-off that says "DANGER! Do not jump across from here! (Hotel accepts no responsibility for accidents.) Elde Inn".[4] If Link jumps to the other side, he can enter the large opening in the wall that leads into the Elde Inn.

Inside the inn, Link can find two Shadow Insects that he can defeat to retrieve two Tears of Light. Link can also find three Shadow Bulblins. In the main lobby, there is a small chest that contains a Red Rupee worth 20 Rupees.[5]

Once the Eldin Province has been returned to its natural form, the Elde Inn is empty. This is because most of the residents of Kakariko Village fled when the Shadow Beasts attacked. The only remaining inhabitants of the village are Renado, Luda, and Barnes.[6] The owners of the hotel have vanished, and thus for the rest of the game, the hotel is unmanaged. However, after Link saves Colin from King Bulblin, he rests in the hotel on the top floor, where he is pestered by Talo to drink the water that he gathered from the spirit's spring and the hot spring.[7][8] Colin is also bothered by Beth, who wants him to eat some stew.[9]

Furthermore, once Link brings the injured Prince Ralis to Kakariko Village from Telma's Bar, he recovers in the inn on the top floor, in the room with the beds. Eventually, Ralis recovers and spends his time in the Graveyard, standing beside his dad's grave.[10][11] After this, the beds in the hotel are empty, and the only people in the hotel are Colin and Luda, both of whom can be found in the main lobby.

The Postman can also be found in the hotel after the Twilight has been diminished. He can be found in the kitchen crouching beside the fire. He is trying to dry a letter that he accidentally dropped into the hot spring.[12] This is one of six secret Postman locations.