From Zelda Dungeon Wiki
Jump to navigation Jump to search
Want an adless experience? Log in or Create an account.
Mother-and-Child Rocks 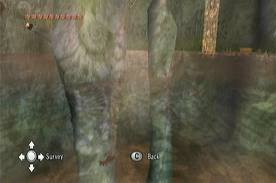 The Mother-and-Child Rocks are a location that appears in Twilight Princess. They are two rocks that stick out of the water in the lower portion pool of water in Zora's Domain. Mother-and-Child refers to their size, as one is larger than the other.

After Link has retrieved a sketch from Ashei, he can show it to Prince Ralis, who tells him the fish the the beast is holding is known as a Reekfish, and that Ralis is the only known fisherman that is able to catch it. This is because, according to Ralis, he uses a special bait, made out of the special type of coral the fish feed on. Ralis recognizes that Link requires to catch one of these fish, so he gives him his Coral Earring. He says the earrings are made of that special coral, and thus can be used to catch the fish. Ralis also mentions his mother, Queen Rutela, gave them to him, and that the fish can be found near the Mother-and-Child Rocks. Link proceeds to go to the rocks and catch the fish. After catching it, he notices it gives off a scent. Wolf Link can smell it and use it to track down Yeto.