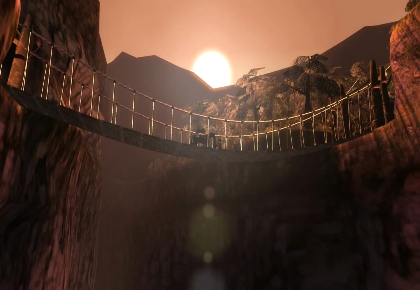 The Ordon Bridge is a location that appears in Twilight Princess. It is a form of suspension bridge, made mainly out of wood. The bridge itself connects two key provinces within the game, the Ordona Province and the Faron Province. To the south of the bridge is Ordon Spring, where the Light Spirit Ordona rests, and to the north is the beginning of Faron Woods.

The bridge itself doesn't play a major role in the game as it mainly serves as the only traversable connection between Faron and Ordona. However, once Link gains the ability to Warp, he can simply use Midna to warp to each province. In the opening scene of the game, Rusl and Link cross the bridge and lock the gate to the Ordona Province, and because of this Link won't be able to access the bridge until he has completed the opening section of the prologue.

Later on in the opening section of the game, King Bulblin and his troops storm over the bridge and attack Ilia and Link. The hero awakens to find the path to the bridge blocked by a Curtain of Twilight. This is in fact the entrance to Faron Woods, which is now covered in perpetual Twilight. As Link approaches, he is dragged through the Curtain by Shadow Beast, thus starting the main quest.