From Zelda Dungeon Wiki
Jump to navigation Jump to search
Want an adless experience? Log in or Create an account.
Bridge of Eldin 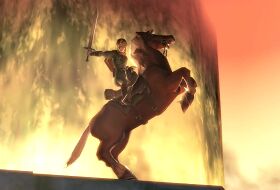 A very different Bridge of Eldin is a location in Breath of the Wild.

The Bridge of Eldin also makes an appearance in Link's Crossbow Training, in Level 6-2, which is entitled Bridge of Eldin: Defender. This type of stage is a defender mode. Similar to the boss fight with King Bulblin, Link has to fend off multiple Bublins riding Bullbos while crossing the bridge. Link must try and shoot the Bulblins as well as the Bullbos to earn points. However, if he is hit, Link takes a 100-point deduction. To pass this stage Link must earn a total of 60,000 points.

The Bridge of Eldin also makes an appearance in Nintendo's Wii fighting game, Super Smash Bros. Brawl. It is one of the 41 featured stages in the game as well as the third stage from The Legend of Zelda series. The stage is entirely flat, however, reminiscent of the boss battle, King Bulblin charges through the stage. Players must avoid King Bulblin otherwise they are knocked off the stage. After he has passed, the evil Bulblin leader drops a bomb that destroys the middle section of the bridge, again reminiscent of what happens in the main game. After a short while the missing bridge returns via a portal.