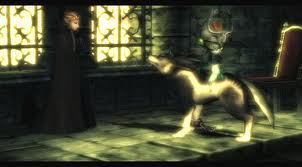 Princess Zelda's Chambers is the home of Princess Zelda in Twilight Princess. It is here where she can be found at every point in the game, apart from the final boss battle, where she is situated within the Throne Room imprisoned by Ganondorf.

Link only visits this area twice in the entirety of the game and on both occasions he is stuck in his wolf form. Both visits are also crucial to progressing the game. Link first stumbles upon this location when seeking Princess Zelda at the request of Midna. After Midna helps Link escape the prison within the Castle Town Sewers, she tells him that she wants him to meet someone. Midna leads the young hero to the Princess' Chambers via the Hyrule Castle Rooftops. Once there, Zelda explains what has happened to Hyrule, including the raid on Hyrule Castle by Zant and his minions and her decision to surrender rather than die. However, Midna and Link cannot stay around for long as Zelda warns them of the guard patrolling the chambers. After escaping the chambers to the rooftops, Midna warps herself and Link out of the castle and to Ordon Spring near Link's hometown of Ordon.

The second and final visit to Princess Zelda's Chambers occurs after completion of the Lakebed Temple, where Link and Midna are attacked by Zant in the Lanayru Spring. He forces the Light Spirit Lanayru to attack Midna, seriously injuring her. The Usurper King also places the Shadow Crystal into Link's forehead, turning him into a Wolf even in the Light World. Midna, now gravely injured, suggests that Link visits the princess to help him transform back into his normal state. Link once again traverses the treacherous rooftops of Hyrule Castle and encounters Zelda once again. She tells Link of a way to break the curse Zant previously set on him. Midna, now seconds away from inevitable death, asks the princess to tell Link the whereabouts of the Mirror of Twilight. Acknowledging Midna's dire condition, Zelda lends Midna the last of her powers. As the princess disappears, now seemingly gone from the world, the newly restored Link and Midna head on with their next quest now with a new goal in mind: save the princess.