From Zelda Dungeon Wiki
Jump to navigation Jump to search
Want an adless experience? Log in or Create an account.
Hyrule Castle Rooftop 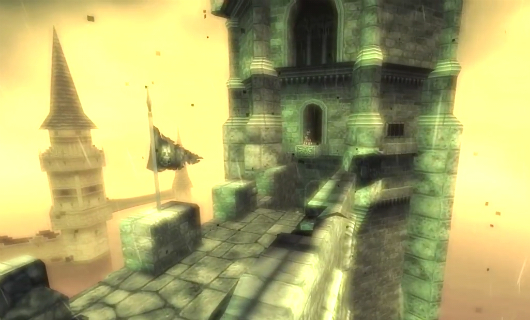 The Hyrule Castle Rooftop is a location featured in Twilight Princess. As the name suggests, this location is situated on a section of rooftops making up the exterior of Hyrule Castle. The main purpose of navigating the rooftops is because it's the only known entrance to Princess Zelda's Chambers in the game, thus making it a pivotal location. This particular section of Hyrule Castle seems to be rather damaged compared to the rest of the structure, which could be due to ongoing construction or the kingdom succumbing to Twilight.

Link travels to this area to reach Princess Zelda's Chambers, where he can find the Princess. During his imprisonment in Hyrule Castle, Link meets a mysterious figure, Midna. She helps Link escape the Castle Town Sewers, which eventually leads to the rooftops. Here Link first experiences the setting of perpetual Twilight, as it now clouds the entire kingdom. The rooftops are very treacherous to navigate due to broken platforms and multiple enemies that roam the skies, including Shadow Kargaroks. Following the linear path eventually leads to the chamber, where Princess Zelda awaits the young hero's arrival.

Link has to revisit this area later on in his quest. After the pair encounter Zant within the Lanayru Spring, the Usurper King gravely injures Midna and sets a curse on Link. Link, now suspended in Wolf form, must seek the help of Princess Zelda. To do so, he must once again navigate his way through the Castle Town Sewers and on to the rooftops. This visit is largely identical to the hero's first visit. However, the Twilight is no more and because of this, normal Kargaroks roam the skies, in comparison to their Twilight equivalents.