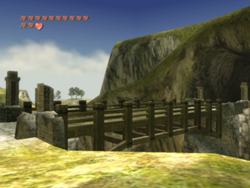 The East Castle Town Bridge, known as the West Castle Town Bridge in the Nintendo Wii version, is a location that appears in Twilight Princess. The bridge is situated immediately outside of the Castle Town West Road. Its main purpose is to connect the Eldin section of Hyrule Field to Castle Town. Throughout the majority of the game, the bridge is broken, making it impossible to cross. One lone Goron, Gor Liggs' Son, waits by the broken bridge, hoping that it can one day be restored.[1]

After Link has obtained the Master Sword, a charity of sorts is set up in Kakariko Village. Gor Ebizo, a Goron Elder, can be found inside Malo Mart, where he asks for generous donations from Link to restore the bridge. After donating a total of 1,000 Rupees, the bridge is successfully repaired. Subsequently, a new charity is set up in an attempt to open a Malo Mart store in Castle Town; however, this requires a substantial amount of Rupees, 2,000 in total.

Even though the bridge is now repaired, Gor Liggs' Son is too tired to begin selling stuff.[2] After hinting that he needs Hot Spring Water,[3] Link returns to Kakariko Village, where he speaks to the Goron's father, Gor Liggs. He offers to help Link revitalize his son. The Goron Elder hands Link a large barrel of Hot Spring Water, which he must successfully deliver to the western bridge. On his journey through Hyrule Field, Link must dodge any enemies that threaten to break the barrel. In addition, since the Hot Spring Water only stays at its current temperature for a limited time, Link must deliver it while it is still piping hot. After reaching the lone Goron and throwing the barrel directly at him, he regains his strength and rolls in the direction of Kakariko Village. As the Goron departs, he leaves behind a Piece of Heart, which Link can obtain. In addition to this, the amount of donations needed in Malo Mart reduces to 200 Rupees, making it much easier for the young hero to successfully help the store relocate.