From Zelda Dungeon Wiki
Jump to navigation Jump to search
Want an adless experience? Log in or Create an account.
Goron Elder 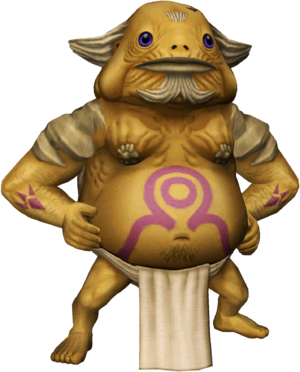 Goron Elders are recurring characters in The Legend of Zelda series. They serve as either the leader or assistant leader of the Goron race.

In Majora's Mask, the Goron Elder is the patriarch of the Gorons of Snowhead. When Link visits Snowhead before the completion of the Snowhead Temple, the Goron Elder can be found frozen in one of the large snow boulders outside the Goron Village. After speaking to the Goron Elder's Son in the Goron Shrine, Link needs to thaw the Elder using Hot Spring Water in order to learn the first half of the Goron Lullaby, a song which the Elder sings to his son to calm him down.

There are four Goron Elders in Twilight Princess, and they are found on, in, and around Death Mountain. Three of them can originally be found in the Goron Mines. If Link visits them, they will each give Link one Key Shard, all three of which are required to restore the Big Key to its original form and open the boss door. After Link has completed the Goron Mines, they leave the Goron Mines.

The Goron Elders in this game are not the leaders of the Goron race. Instead, the leader is the Goron Patriarch, Darbus. The Goron Elders go by the names Gor Coron, Gor Ebizo, Gor Liggs, and Gor Amoto. Gor Coron is the first elder found in the game. Before completing the Goron Mines, he can be found acting as leader in the first room at the top of the mountain. Gor Amoto is the first elder found within the Goron Mines. He gives Link his first Key Shard for this dungeon. After Link completes the dungeon, Gor Amoto is still found in Death Mountain. Gor Ebizo is the second elder found inside the mines who gives Link a Key Shard. After the dungeon, he is found inside Malo Mart in Kakariko Village asking for donations. Gor Liggs is the last elder encountered by Link. He has the third and final Key Shard, completing the Big Key. Later, he can be found outside Malo Mart waiting to give Link Hot Spring Water to complete a side quest for a Piece of Heart.

Biggoron is the Elder and leader of the Gorons that inhabit Goron Island. He has a son named Gongoron. In order to pass through on his quest for Pure Metal, Link has to partake in a quiz given by Biggoron about the inhabitants of his island. Link must get all six questions right in one go to succeed. Unlike previous Biggorons, the Elder of Goron Island is not the size of a mountain; he is still larger than the average Goron, but not drastically.

Before the Great Calamity, the warrior Daruk was a Goron Elder. This status, along with Daruk's Protection, made him a clear candidate to pilot Divine Beast Vah Rudania. 100 years later, Goron City is under the rule of the Elder Bludo, who personally fought off Vah Rudania alongside Daruk's grandson, Yunobo.