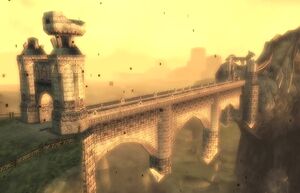 Great Bridge of Hylia in Twilight

The Great Bridge of Hylia is a location from Twilight Princess. It's a large bridge within the Lanayru Province and it spans across the vast Lake Hylia. This vast bridge is made of stone and is still in great condition, in contrast to the Bridge of Eldin which appears to be in ruins. This bridge is situated high above Lake Hylia, and is the only way to reach the Faron Province directly from the Lanayru Province.

Link first encounters this location when trying to rid the Lanayru Province of perpetual Twilight. When the young hero enters the vicinity, he encounters a Bulblin who sets fire to both opposing ends of the bridge thus trapping Link and Midna. Link, in Wolf form, must find away to escape his impending death. The only notable away from escaping the raging fire is for him and Midna to jump off the bridge, where he then finds himself within the drought struck Lake Hylia.

Link comes across the bridge again later in the plot. This time Link, again, must face off atop the bridge against King Bulblin while escorting a sick Prince Ralis, Ilia, and Telma to Kakariko Village. The battle is very reminiscent of the previous battle on the Bridge of Eldin. After defeating King Bulblin, Link can proceed to transport Prince Ralis to the safe confines of Kakariko Village.

This is also the location of 2 out of the overall 24 Golden Bugs within the game. The Male Mantis is seen flying round near the northern section of the bridge. It's counterpart, the Female Mantis, can be seen on the opposing end of the bridge situated on rock face.

The Bridge of Hylia is a location in Breath of the Wild.