From Zelda Dungeon Wiki
Jump to navigation Jump to search
Want an adless experience? Log in or Create an account.
Ordon Spring 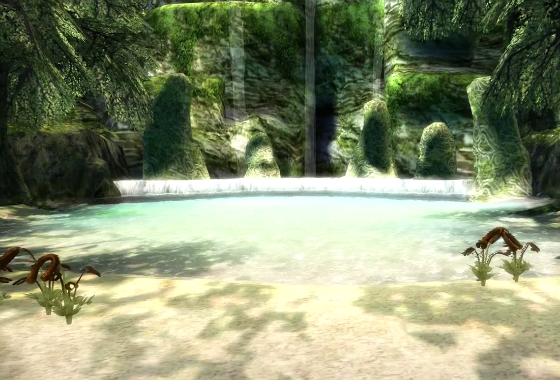 The Ordon Spring is located in the middle of the Ordona Province in Twilight Princess. This is one of the four Springs across Hyrule. It is home to one of the Light Spirits in the game, Ordona.

Link first comes across the spring in the prologue. After Link saves Malo, he returns to Ordon Village and is tasked with finishing herding the Ordon Goats.[1] Ilia notices a gash on Epona and she claims that Link has been working Epona too hard.[2] Ilia is mad at Link and takes Epona to the Spring to heal her wounds.[3] Link notices that the gate to the Spring is now closed; however, Colin tells Link about a secret passage.[4] This hidden passageway is located to the side off the Spring in a small crawl space. Once Link enters the Spring, a small cutscene takes place. Ilia forgives Link, as Colin told her what happened with Talo.[5] However, shortly after they hear a noise, it is at this moment King Bulblin and his army of Bulblins raid through the Spring and attack Link, Ilia and Colin. Link wakes up from being left unconscious and notices that Colin, Ilia and Epona have been taken. Link then comes upon a Wall of Twilight. A Shadow Beast then drags the young hero into the Twilight Realm.

Once Link has escaped his imprisonment in Hyrule Castle with the help of Midna, he returns to Ordona Province. After Link has collected the Ordon Shield and Sword from Ordon Village, he is lured back to the spring by the voice of Ordona. This is the first time Link in Wolf form faces a Shadow Beast in combat.[6] After Link has defeated the Beast, Ordona reveals his true form.[7] Ordona tells Link about the Shadow Beasts[8] and that he must return the light to the other three provinces across Hyrule.[9] After this section of the game, there is no need to come to this area to advance the plot.

This is also the location where Link learns one of the seven Hidden Skills. After using the Howling Stone on the trail up to Death Mountain, a Golden Wolf appears in Ordon Spring. This is where Link learns the Shield Attack from the Hero's Spirit.

If the first 10 floors of the Cave of Ordeals is completed, Fairies appear in Ordon Spring; an easy way to restore health is if the Fairies are stored in Bottles. If Link stands in the water, his health is slowly replenished.