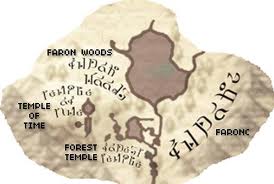 Map of the Faron Province in Twilight Princess

During the events of Twilight Princess, Link first enters the Faron Woods after Talo goes off in pursuit of a Monkey, who had previously stolen Uli's Cradle. In this sequence Link briefly passes through the southern Faron Province. In this area, Link talks to Coro, who in turn gives Link the Lantern. When continuing on through the cave, Link goes through the northern section where he has to find the key to gain further access towards the Forest Temple. Once reaching the entrance of the Forest Temple, Link finds Talo and the Monkey in a cage, guarded by a Bokoblin.

Later on in the first section of the game, Link has to restore light to Faron Province, as now the Shadow Beasts have took the light from the light spirit Faron. Link is tasked with capturing the 16 Tears of Light by Ordona. Once the Vessel of Light has been restored, Link now appears in his original form and Faron informs him about the darkness within the Forest Temple.

Other plot points where Link has to return to Faron Province include, when he has to find a broken section of the bridge in the Kakariko Gorge, for him to continue onto Eldin Province. Link again returns to this province when he is cursed by Zant, meaning Link is now suspended in his wolf form. Princess Zelda tells Link about the key to unlocking the curse, which is in fact the Master Sword. The Legendary Blade is hidden deep with Faron Woods, in a place known as the Sacred Grove. Further on in the game Rusl tells Link about a mysterious temple within the Sacred Grove known as the Temple of Time. This is the location of one of the three Mirror Shards that Link has to find, in order to restore the Mirror of Twilight.