From Zelda Dungeon Wiki
Jump to navigation Jump to search
Want an adless experience? Log in or Create an account.
Kikwi 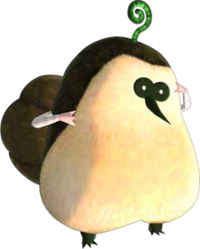 The Kikwi are a shy, herbivorous race found in Skyward Sword that live in Faron Woods. They are easily intimidated by Link and Fi, but they prove helpful in getting to Skyview Temple and Lake Floria. Their round tails open to reveal a bush, which the Kikwi use for camouflage. Each Kikwi sports a unique face, similar to the Koroks in The Wind Waker. While many of the Kikwi are smaller than Link, they seem to grow to much larger sizes as they age. Bucha, who the Kikwi refer to as their elder, is twice Link's size. However, the Kikwi hermit Yerbal is also old, so it may just be that the leader of the tribe is the only giant one. Kikwi vaguely resemble Tanuki from Japanese culture, or even penguins or squirrels.

The first Kikwi Link meets is named Machi. He is found being attacked by two Bokoblins. He then escapes thinking Link wants to attack him as well. After finding him three times, he realizes that Link means no harm and introduces himself. He recalls that a girl (heavily implied to be Zelda) passed by and was in the area. Then, Machi directs Link toward the Kikwi elder, Bucha.

Once Link finds Bucha, he asks Link to rescue three lost Kikwi—Oolo, Erla, and Lopsa. When Link returns, Bucha rewards him with the Slingshot.

Much later on Link's quest, when revisiting Faron Woods, Link meets a Kikwi sleeping on a branch on the top of the Great Tree. Hit him with the Beetle or Slingshot to wake him up. The Kikwi, named Yerbal, will then direct Link towards Lake Floria, and show him how to open the door blocking it. Later, when Link meets Faron the Water Dragon, she tells Link that she will eat Yerbal for revealing her location.