From Zelda Dungeon Wiki
Jump to navigation Jump to search
Want an adless experience? Log in or Create an account.
Machi 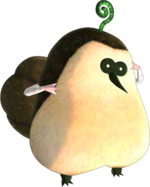 Machi is a character in Skyward Sword. He is a member of the Kikwi race that lives in the Faron Woods.

Link first finds Machi curled up into a ball on the ground, being attacked by a pair of Bokoblins. Machi is playing dead.[1] When Link defeats the two enemies, Machi initially thinks it is safe, but he becomes scared when he spots Link and runs away.[2][3][4] Fi mentions that Machi causes a spike in dowsing readings that correlate with Zelda.[5][6] As a result, Link chases after Machi, finding him hiding behind two mushrooms and eventually a tree. When Link at last catches him, he realizes that Link is not an enemy and introduces himself.[7][8] He then comments on how he had earlier seen a girl of Link's race who escaped from trouble with the Kikwi elder, Bucha.[9][10] Realizing that it is Zelda, Link sets off to find her, but only after Machi has asked him to tell Bucha about his location.[11] When Fi materializes shortly after, Machi is terrified and tries to camouflage himself as a plant again.[12]

The next time that Link sees Machi is just after he completes Skyview Temple. The Kikwi waits outside the entrance for him, wondering if Link had found his friend.[13] He is saddened if Link forgets who he is.[14]

Later, the Faron Woods area is flooded completely, forcing the Kikwis to stay on floating pieces of debris. Machi ends up on a lilypad with Lopsa, where he urgently tells Link that the flooding is the Water Dragon's fault.[15] After the water is drained, he wanders around in the main part of the woods.