From Zelda Dungeon Wiki
Jump to navigation Jump to search
Want an adless experience? Log in or Create an account.
Karane 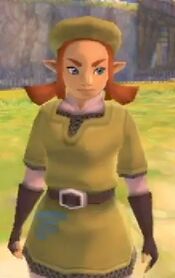 Karane is a character in Skyward Sword. She is one of the female students at the Knight Academy.

Karane often points out flaws in peoples manners or normal habits. She is a short and somewhat attractive young woman, as Fi observes she is popular with the male students at the Knight Academy. She wears a yellow-green Knight's Uniform.

Karane has a secret crush on Pipit, which becomes more and more obvious midway through the game. She spends a good deal of time standing at the back of the Knight Academy's classroom staring at the bookcase and daydreaming about Pipit.

At one point in the game, Link is asked by Cawlin to deliver a love letter to Karane. If Link chooses to do so, Karane is confused and embarrassed by the letter. When confronted by Cawlin who asks her to go on a date, Pipit steps in and reveals his feelings to Karane, who chooses Pipit as her boyfriend. The two remain a happy couple throughout the rest of the game.