From Zelda Dungeon Wiki
Jump to navigation Jump to search
Want an adless experience? Log in or Create an account.
Mr. Tubert 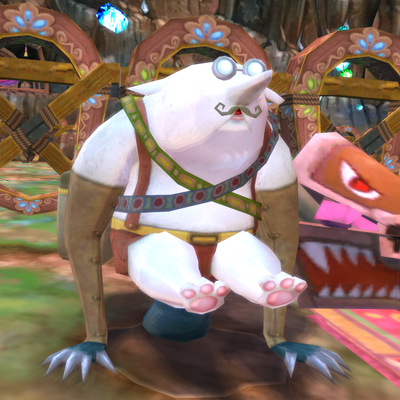 Mr. Tubert is a character featured in Skyward Sword. He is a member of the intelligent Mogma race. However, unlike most Mogmas, he isn't interested in treasure hunting; instead, he earns his money by operating the Thrill Digger mini-game.

If Link sits down on the stool next to Mr. Tubert, he will ask Link if he would like to chat with him. If Link answers yes, he will be given the option of asking three different questions: "Who are you?", "Are you floating?", and "Is it too bright for you?".

Mr. Tubert is not actually floating, but instead standing on his tail. He does this so that he can show off his paws on his feet, which he believes to be his best feature. If asked "Is it too bright for you?" he explains that he only wears his glasses to look cool. He also takes pride in his moustache

If Link asks Mr. Tubert the question of "Who are you?" before the Bokoblin tower outside the cave is knocked over, he will complain about the recent "scary-red-monster" infestation in the area and how it's been detrimental to his business. He also states that he wishes somebody would come and demolish "those ugly towers" and send the red monsters scampering away. This could be a hint for Link to bomb the Bokoblin lookout tower outside of the cave to progress through Eldin Volcano. However, if Link asks this question after the tower is knocked over, then he will simply talk about how he is upset that all of his Mogma friends think Rupees are easy to find, and thus they never play his Thrill Digger game.