From Zelda Dungeon Wiki
Jump to navigation Jump to search
Want an adless experience? Log in or Create an account.
Guld 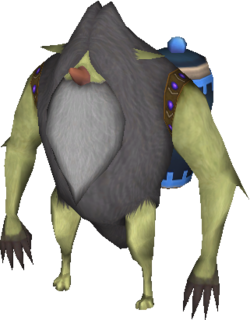 Guld is an elderly Mogma in Skyward Sword. He has long served as the leader of the Mogmas; however, he wishes to find a replacement, according to Fi. He longs to go and explore the sky, but he can't leave until a new leader has been appointed.

He is part of a sidequest where he must be taken to the Lumpy Pumpkin to help Kina with field work. At first he is reluctant, saying that such work is beneath him, but when praised and encouraged by Kina, he begins to do it without hesitation.

As many Mogmas' names are derived from minerals, it is likely that Guld comes from the element gold.