From Zelda Dungeon Wiki
Jump to navigation Jump to search
Want an adless experience? Log in or Create an account.
Henya 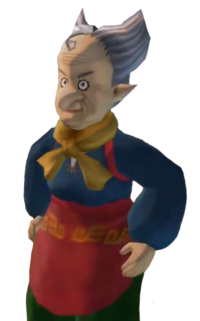 Henya is an employee of the Knight Academy in Skyward Sword. She has worked there since it started, 25 years previous. According to Fi, she is very spirited and quick to give her opinions. Henya serves meals to students at the academy. Henya is very disgruntled when a student comes in for a meal late or breaks her pottery and glassware.[1][2][3]

If you sit at one of the tables, she will yell at you for being late to breakfast, and that you'll have to wait for lunch. If you walk over to her, she'll complain about Fledge being late with her barrels. After speaking with Fledge a second time, you can take a barrel over to Henya, who will simply say thanks and mention the Wing Ceremony.