From Zelda Dungeon Wiki
Jump to navigation Jump to search
Want an adless experience? Log in or Create an account.
Crimson Loftwing 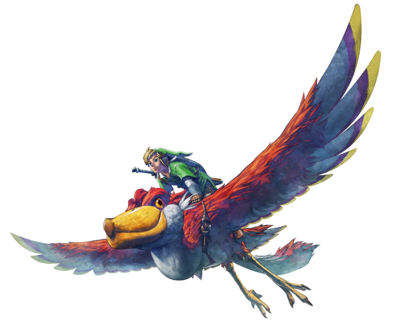 The Crimson Loftwing is Link's feathery friend and mode of transportation in Skyward Sword. Link can leap off ledges and call his bird as he falls. Link's bird will swoop right underneath him giving Link a perfect landing spot. Link can use his bird to travel between the various islands in The Sky.

Link flying on his Crimson Loftwing across The Sky

Link's bird seems to have some sort of connection with Zelda's bird, as the two can be seen flying together even when Link and Zelda are not with each other. Link's bird can hold more than one passenger at a time, as Link and Zelda are both riding on the bird simultaneously at one point in the game.

Link's bird is a rare breed of Loftwing, being bright crimson in color.[1] Link, like all Skyloftian Loftwing riders, befriended his bird as a child or young adolescent. According to Gaepora, Link and his bird possess a bond like no other in Skyloft, as Link was able to fly with ease when he first met his Loftwing, which is something that even Zelda was jealous of.[2][3]

Link's Loftwing was stated to be a special bird by the developers, and it's unclear if this is the only trait that makes him special or if there is more to it.