From Zelda Dungeon Wiki
Jump to navigation Jump to search
Want an adless experience? Log in or Create an account.
Plats 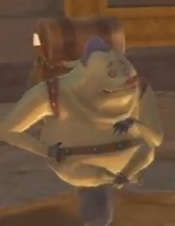 Plats is a Mogma found in Skyward Sword. He is larger and greedier than most Mogmas and is a top treasure hunter. He is first found in the Fire Sanctuary in an underground tunnel. He initially believes that Link is a monster and runs away from him while attempting to block his path.[1] Once Link traps Plats and catches up to him, he sees that Link has his brother's Mogma Mitts and realizes that Link isn't a monster; he then gives him a Piece of Heart to make up for it.[2][3]

He later appears in Eldin Volcano during the Song of the Hero quest, after Link is captured by Bokoblins. Plats obtains Link's Mogma Mitts from the Bokoblins and returns them to him, so he can escape his prison. He also updates Link's map with the equipment that was stolen from him.[4][5]