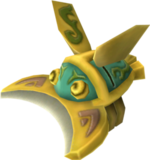 "Press A to launch the Beetle into the air, and tilt the Wii Remote to control it. Fly into an item to catch it and carry it. Press Z to look down and A to drop the item. Holding the A button will cause the Beetle to speed up."

The Beetle is an item that appears in Skyward Sword.

The Beetle resembles the insect of the same name and it is a small mechanical-like device that can fly to reach areas Link could not reach himself. Players equip the Beetle to the B-button and release it with the A-button, thus taking control of the item with Wii Motion Plus as it flies through the air, given a third-person perspective from behind the Beetle as it flies. The Beetle has a limited distance it can fly before it shuts off and has to be re-equipped and re-launched, and must also be re-equipped when it hits a wall or other obstacles. Link can also call back the Beetle at any time during its flight.

The initial Beetle can be used to cut down spider webs or hit switches in otherwise unreachable areas. Upon defeating the Stalfos mini-boss in Skyview Temple, Link obtains the Beetle. It comes with a sharp, razor-like edge that can slice through spider webs and cut Deku Babas at the stem. If the item is used near Bokoblins with melee weapons, they will run away from it; if Bokoblins with bows are present, they will shoot it to disable it.

As most items can be upgraded throughout the game, the Beetle too has other upgrades that can be obtained later on in the game.

Early on in Lanayru Desert, one of the Ancient Robots calls Link's Beetle an older model of Lanayru fabrication and upgrades it for Link. This upgrade allows Link's Beetle to pick up items and drop them to solve puzzles.

Appearance in Super Smash Bros. for 3DS and Wii U

The Beetle makes an appearance in Super Smash Bros. for Nintendo 3DS and Wii U as an item. Players can pick up the Beetle and throw it at their opponents, who will then be carried off screen for a KO unless they break out of it. If attacked by a player, the Beetle will reverse its direction.