Isle of the Goddess

From Zelda Dungeon Wiki
Jump to navigation Jump to search
Want an adless experience? Log in or Create an account.
Isle of the Goddess 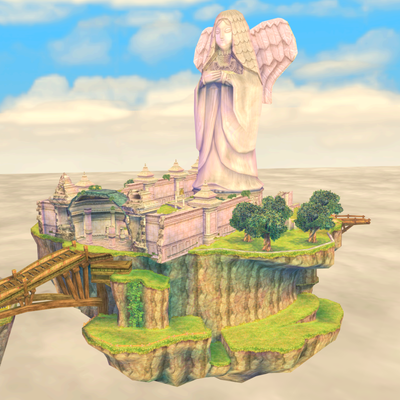 The Isle of the Goddess is a block of land, initially seen floating in the sky beside Skyloft and connected to it by a bridge. It is dominated by The Statue of the Goddess, the largest known Goddess Statue.

Many, many years passed, in which "the Surface" and the events which happened there became largely forgotten by Skyloftians, save for a few unreliable legends kept by senior figures such as Gaepora. The Goddess continued to be worshipped by them, however, and the Ceremony of the Goddess took place annually upon the giant statue.

Ultimately, after the Goddess' human reincarnation - known as Zelda - was kidnapped by Ghirahim, the sword spirit Fi drew Link to the hidden interior of the statue to claim the Goddess Sword. This led to a chain of events which included Link discovering the hidden Sky Keep and claiming the Triforce from it. He used this to return the Isle of the Goddess to its original position on the Surface, in what had become known as the Sealed Grounds, to kill Demise in his monstrous The Imprisoned form.